January 2015 – As an 18-year-old, Scott Stewart didn’t expect his job at a sheet metal shop to grow into a career. “I kept my head down and worked my way up,” he recalls. By his 27th birthday Stewart was general manager of a 50-man job shop but still, the realization that “this is my career” only hit him a few years after that. “Like me, a lot of individuals today don’t look at sheet metal work as something that could be long term.”

After spending 32 years in the industry and building a solid reputation, Stewart wasn’t thinking about retirement. Instead, he wondered: What would it take to start with a clean sheet of paper?

Stewart established Advanced Metal Manufacturing in Simi Valley, California, in 2010. Some might find the task of starting a new business on the heels of an economic downturn daunting, but “having worked as a general manager for so many years, I knew what it took to start a business.”

In less than a month Stewart had his job shop outfitted with about a dozen machines and employees he handpicked to run them. Advanced Metal Manufacturing laser cuts, punches, bends, welds, grinds and finishes 24-gauge to 1⁄4-in.-thick sheet metal. “If it’s made of sheet metal we’ll build it,” Stewart says. Finished products range from clean room equipment to machine enclosures and dog crates for breeders. 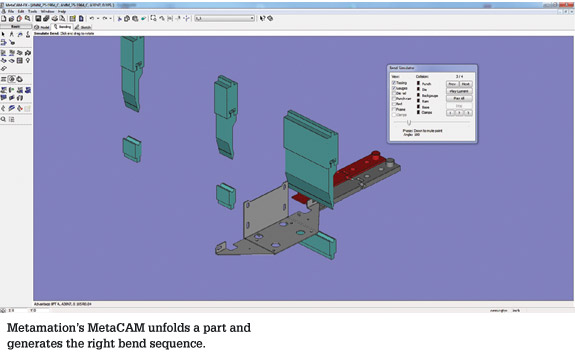 Companies that seek to do business with Advanced Metal Manufacturing won’t find it on the Internet or see signage that identifies its brick and mortar structure. Business comes largely by word of mouth. “We started with a couple select customers,” explains Stewart. “We’re growing slowly and responsibly. You only get one shot at a new customer. If you fail them, they won’t come back.”

The entrepreneur is looking for ways to squeeze greater efficiencies out of the job shop’s workflow. Reshoring has put domestic manufacturing activity “on an upward trajectory,” he says. “We want to be part of the growth.” Greater efficacy included making an investment in Wilson tooling, SolidWorks and Metamation’s MetaCAM bending software. Elk Grove Village, Illinois-based Metamation designs and develops open architecture software that can take manufacturers from CAD or SolidWorks to bending, tooling and nesting solutions.

Stewart based his tooling and software choices, in part, on past experience. “Early on in my previous position I purchased Wilson segmented tooling,” he says, but “it’s expensive [and] it can be challenging for some job shops to consider that type of expenditure.”

Advanced Metal has as much invested in tooling “as it would cost me to purchase another press brake. But my investment makes my four press brakes [8 ft. to 12 ft., 80 tons to 175 tons] work like five machines. The lineup gives me the capability to tackle most things.”

Stewart has been following software developments for the last two decades, waiting for programming to mature. With MetaCAM, Stewart says software has finally advanced to a level that can help him solve problems like lost production time at the press brake.

He considered several software packages but wanted one that offered open architecture. Metamation’s ability to support most major press brake models caught his eye. And the software is homegrown, designed and developed from the ground up without third-party sourced components.

Following 12 months of research and demonstrations, Stewart brought Metamation and another contender to his shop. “I had submitted part drawings that dictated tough solutions because I wanted to see if the software could come up with the same solution we did,” he says. “I also wanted to judge the software’s problem-solving ability and see if it could create the right bend sequence regardless of the operator’s experience. That’s when Metamation really pulled ahead.”

“The question we like to ask is: ‘Do you really want skilled personnel using a $100,000 press brake like a $500 computer?’” says Leo Wegner, regional sales manager for Metamation. “That’s basically what an operator is doing when they create and load bending sequences at the press brake.”

The software’s ability to pull programming away from the press brake helped Advanced Metal to hurdle the obstruction blocking higher production rates.

“While operators were analyzing and programming the best bend sequence, the press brake was sitting idle,” Stewart explains. “Using MetaCAM to program jobs offline gave us several advantages. Depending on the experience level of the operator, there can be a short learning curve to determining setup—time that essentially is non-value-added. Pulling that process from the machine to the office gives the programmer flexibility to say, ‘What if?’ They can study different approaches and determine which one is most effective.” 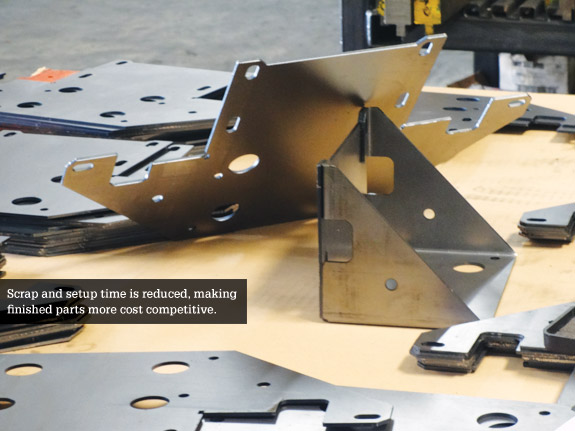 Because the software simulates the bending sequence, errors can be identified and corrected before putting the material into the machine. “Scrap and setup time are reduced,” Stewart says.

Higher efficiency also produces dividends that support efforts to create and maintain a positive work environment geared to inspire longevity. “We’re able to pay a fair wage and offer benefits,” he says. “But these things are only possible by being as efficient as possible. That comes in large part through components like tooling and software.”

With MetaCAM, Stewart can import a solid model, unfold the part and provide the right bend sequence. “MetaCAM is easy to work with and gives you flexibility,” he says. “The software looks through your tool library and provides you with your bend sequence. But it also allows you to go in and make changes if you want to unfold a part using a different approach from the one provided by the computer.”

In addition, the program’s ability to store and provide all tooling and sequence information saves Advanced Metal “a significant amount of time while allowing us to manipulate the information offline and at the press brake control.”

The software is equally user friendly for press operators, says Wegner, allowing them to call up parts, view bending simulations and see where tooling will strike the die and the material. “They can also call up the tool list for a job,” he says. “If they see that the same tooling will be used for another job later in the day, they can make the decision on the fly to shuffle that work to run in succession and further boost efficiency.”

Balancing customer satisfaction with efficiencies that reduce steps for employees and help them focus on self-rewarding activities is directly tied to having the right technology. “You can use segmented tooling alone and be efficient,” Stewart observes. “But when you marry software like MetaCAM with reliable tooling, that’s when you see productivity jump. The combination also makes your investment in your tooling pay off that much faster.”

Stewart says he wants his business to continue to fly under the radar but keep up its steady growth. He is excited about advances materializing throughout the sheet metal industry. “I want others to get excited, too. Tooling and software like MetaCAM help you see the potential for all the cool things you can build.” FFJ – By Lynn Stanley

This website uses cookies to improve your experience while you navigate through the website. Out of these, the cookies that are categorized as necessary are stored on your browser as they are essential for the working of basic functionalities of the website. We also use third-party cookies that help us analyze and understand how you use this website. These cookies will be stored in your browser only with your consent. You also have the option to opt-out of these cookies. But opting out of some of these cookies may affect your browsing experience.
Necessary Always Enabled
Necessary cookies are absolutely essential for the website to function properly. This category only includes cookies that ensures basic functionalities and security features of the website. These cookies do not store any personal information.
Non-necessary
Any cookies that may not be particularly necessary for the website to function and is used specifically to collect user personal data via analytics, ads, other embedded contents are termed as non-necessary cookies. It is mandatory to procure user consent prior to running these cookies on your website.
SAVE & ACCEPT